Risk : The Science and Politics of Fear 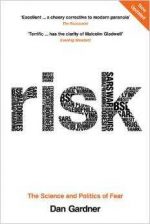 In the tradition of Malcolm Gladwell, Gardner explores a new way of thinking about the decisions we make.

We are the safest and healthiest human beings who ever lived, and yet irrational fear is growing, with deadly consequences — such as the 1,595 Americans killed when they made the mistake of switching from planes to cars after September 11. In part, this irrationality is caused by those — politicians, activists, and the media — who promote fear for their own gain. Culture also matters. But a more fundamental cause is human psychology.

Working with risk science pioneer Paul Slovic, author Dan Gardner sets out to explain in a compulsively readable fashion just what that statement above means as to how we make decisions and run our lives. We learn that the brain has not one but two systems to analyze risk. One is primitive, unconscious, and intuitive. The other is conscious and rational. The two systems often agree, but occasionally they come to very different conclusions. When that happens, we can find ourselves worrying about what the statistics tell us is a trivial threat — terrorism, child abduction, cancer caused by chemical pollution — or shrugging off serious risks like obesity and smoking.

Gladwell told us about “the black box” of our brains; Gardner takes us inside, helping us to understand how to deconstruct the information we’re bombarded with and respond more logically and adaptively to our world. Risk is cutting-edge reading.

What people are saying about Risk:

“An excellent work ... a cheery corrective to modern paranoia.”

“The Science of Fear elegantly weaves academic research and everyday experience, exposing the secrets of emotion and reason, and the essential roles they play on our lives. An excellent book.”

“Those of us who spend our careers in research hope that someone like Daniel Gardner will come along and bring our findings to the world in an engaging and scientifically accurate way. Thank you, Dan! Some books can change the world. This one might.”

— Paul Slovic, Professor of Psychology, University of Oregon, past President of The Society for Risk Analysis

“Fear needs a science and Daniel Gardner offers a fast-paced tour of what the most interesting researchers have revealed. The number of things that you don't need to be afraid of is encouraging, but finding out why we still do fear them anyway is fascinating. Essential reading for anyone interested in the social mistakes we make everyday--and how to fix them.”

“Gardner’s vivid, direct style, backed up by clear examples and solid data from science and psychology, brings a breath of fresh air and common sense to an emotional topic.”

“Compelling.... By showing how to read statistics properly and engage the head over gut instinct, Gardner aims to get us thinking more carefully about how we run ourlives - and make it harder for politicians, the media and advertisers to lead us astray.”

“Terrific.... As a writer, he's exceptionally good - he has the clarity of Malcolm Gladwell.... He takes you through a maze of difficult academic work, and makes it seem simple.”

“Risk gives a fascinating insight into the peculiar and devastating nature of human fear, while training the reader to be ever wary of misleading media announcements.”

“Risk elegantly summarises the results of psychological research.... Gardner is forensic in his dissection of bogus claims in advertising and politics, just as he is lucid about the science explaining why they work. His chapters on the risk of being a victim of crime or terrorism provoke a peculiar mix of comfort and despair. It is heartening that the danger is slight; it's unsettling how skewed our political system and consumer culture are towards convincing us of the opposite.”

“An excellent work.... Mr Gardner never falls into the trap of becoming frustrated and embittered by the waste and needless worry that he is documenting. A personal anecdote about an unwise foray into a Nigerian slum in search of a stolen wallet disposes of the idea that the author is immune to the foibles he describes. What could easily have been a catalogue of misgovernance and stupidity instead becomes a cheery corrective to modern paranoia.”

“Where writers such as Richard Dawkins, Christopher Hitchens and Francis Wheen have been content largely to enumerate the errors of less rational men and women, Dan Gardner has collated part of what we need to diagnose the problem. If sceptics spent less time moaning about the propensity of their fellows to believe what they want to believe and more time asking why they do so, there might not be such a crisis of reason in the West today.”

“Advocates of philosophy and critical thinking as panaceas for widespread irrationality have only got it half right. Unless we understand the psychological forces that shape our thinking, being equipped with logic is as likely to give us the tools to rationalise our prejudices as it is to empower us to challenge them. Gardner's book is thus an invaluable resource for anyone who aspires to think clearly.”

“There has been a rash of books and films recently on the politics and culture of fear, but unlike most of them, Dan is not content to blame the media, or blame corporations. He leads us through the evolutionary biology that underlies our sense of risk and the innumeracy that confounds our attempts at managing it, and only then does he turn to the way these cognitive dispositions allow for political manipulation. In short, this is the best book out there on one of the most important subjects of our time.”

“Gardner achieves some very clearheaded calm-mongering. By showing us how we misunderstand and miscalculate risks, he gives us the tools to rethink them.”

“...an entertaining, often jolting account of why trivial risks terrify us, even as we engage in wildly dangerous activities with hardly a qualm.”

“Risk is a timely book that is packed with absorbing details.”

Risk in the Media:

Where to buy Risk