How Big Things Get Done 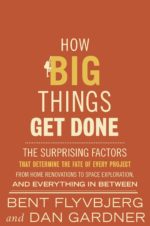 Nothing is more inspiring than a big vision that becomes a triumphant, new reality. Think of how the Empire State Building went from a sketch to the jewel of New York’s skyline in twenty-one months, or how Apple’s iPod went from a project with a single employee to a product launch in eleven months.

These are wonderful stories. But most of the time big visions turn into nightmares. Remember Boston’s “Big Dig”? Almost every sizeable city in the world has such a fiasco in its backyard. In fact, no less than 92% of megaprojects come in over budget or over schedule, or both. The cost of California’s high-speed rail project soared from $33 billion to $100 billon—and won’t even go where promised. More modest endeavors, whether launching a small business, organizing a conference, or just finishing a work project on time, also commonly fail. Why?

Understanding what distinguishes the triumphs from the failures has been the life’s work of Oxford professor Bent Flyvbjerg, dubbed “the world’s leading megaproject expert.” In How Big Things Get Done, he and Dan Gardner identify the errors in judgment and decision-making that lead projects, both big and small, to fail, and the research-based principles that will make you succeed with yours.

What people are saying about :

“This book is important, timely, instructive, and entertaining. What more could you ask for?”

Over-budget and over-schedule is an inevitability. Incompetence and grift is outrageous. Bent Flyvbjerg, with this terrific data-driven book, has shown that there is another way.

A wise, vivid, and unforgettable combination of inspiring storytelling with decades of practical research and experience . . . Everyone who deals with large projects is already desperate to read this book. The rest of us will take great pleasure in learning from it anyway.

My only complaint about this book is that it wasn’t written earlier. Finally, here’s a guide to navigating the embarrassingly predictable mistakes we all tend to make when taking on life’s biggest and most important projects. Unlike so many other books from self-proclaimed business gurus, How Big Things Get Done is not based on mere anecdotes; it distills decades of systematic research from more than sixteen thousand projects worldwide. The result is a crystal-clear pattern of surprising reasons why almost all big human projects fail to deliver as expected—and a road map for the book’s lucky readers to avoid them.

— Ola Rosling, CEO and co-founder of Gapminder; co-author of Factfulness

— Bill McKibben, author of The Flag, the Cross, and the Station Wagon

Flyvbjerg’s study of big construction projects worldwide has led him to formulate the iron law of megaprojects: over budget, over time, under benefits, over and over again. His deep understanding of why big projects fail—and occasionally succeed—makes this book a truly fascinating read. There’s a practical payoff, too: a toolbox with eleven smart heuristics for better project leadership that every planner who wants to succeed should know.

Having researched the properties of planning errors, I am confident that nobody has studied the topic more broadly and deeply than Bent Flyvbjerg. His focus ranges from the Olympic Games to the renovation of your doghouse.

— Nassim Nicholas Taleb, distinguished professor of risk engineering at the NYU Tandon School of Engineering, and author of the Incerto series

This book distills the best scientific advice on planning big projects. And it is arguably the bargain of the century. For a few dollars you can tap into thousands of dollars’ worth of insights in executive-education classrooms—and if you happen to be a CEO or head of state, the savings will quickly run into the billions.